Zubel during a feedback session for This Is How Girls Die, 2019. 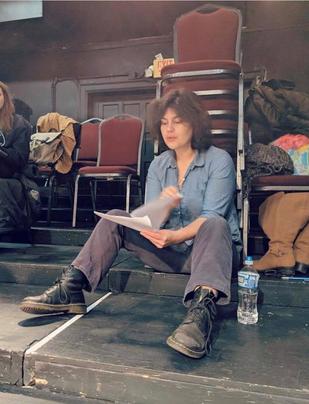 Paige Zubel (she/they) is a Philadelphia-based playwright, dramaturg, and producer. Their works have been developed and produced by 50+ theatre companies internationally, including Berridge Conservatory (Amos and the Stars, France), Normal Ave (Dead Meat, NYC), and What If? Productions (A String Between Man and the World, NC). Most recently, she was awarded 2nd place and Special Commendation for their play Actually, Honestly Going to Fucking Die for Philadelphia Theatre Company's Terrence McNally Award. Her plays and prose are published by houses including Smith & Krause, One Act Play Depot, and Applause Books. They are the Associate Artistic Director of Shakespeare in Clark Park, and were the 2018-2019 National New Play Network Producer in Residence at InterAct Theatre Company. She sits on the Artistic Advisory Board of Paper Doll Ensemble (PA), and the Board of Kaleidoscapes Theatre Company (NYC). Writer's groups: PlayPenn's The Foundry, class of 2020; InterAct Theatre Company Core Playwright, class of 2021; Philadelphia Theatre Company Playwriting Fellow, 2021-2022 season. More of their work can be found on the New Play Exchange.